Jacksonville, Florida Plastic Surgeon Explains; What is a Facelift? Jacksonville, Florida Plastic Surgeon Explains; What is a Facelift?

A Jacksonville, Florida plastic surgeon explains; what is a facelift? Dr. Brett Snyder, a board certified plastic surgeon says the word facelift is perhaps the most loaded term in plastic surgery and there are a wide range of opinions about what a facelift is and what it involves. He says much of this confusion comes from popular media and celebrity stories about cosmetic surgeries. Further confusion is created by various terms used to market these procedures, such as the “Lifestyle Lift”, the “Whisper Lift”, and the “Feather Lift.”

What is a Facelift?

Snyder says, “When we talk about the face, we are generally talking about the area from the chin to the eyebrows. Facelifts as we generally think of them don’t address this area. The traditional facelift is probably better termed lower face and neck lift, because those are the areas that benefit most from the operation.”

Procedures that correct the eyebrows, eyelids and cheeks are usually separate from the traditional facelift procedure and they have their own names such as brow lift and mid facelift. Snyder keeps the terminology simple for his patients and tries to be very specific when explaining how each procedure will help.

Who Would Benefit From a Facelift?

The American Society of Aesthetic Plastic Surgeons (ASAPS), says most patients who are interested in a facelift feel their facial features do not reflect their youthful spirit and energy level. They’re looking for ways to refresh and rejuvenate their appearance.

If you’re seeing signs of aging in your face and would like to do something about it, a facelift might be for you. A facelift can correct some of these common signs of aging… 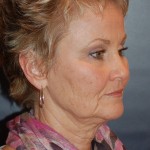 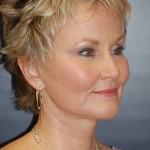 Dr. Snyder says the lower face and neck lift will improve the appearance of the lower cheeks and jowls, the jawline and the neck. “This will also help the hanging bands in the middle part of the neck,” says Snyder.

However, many people don’t understand why they have to do a facelift if they are just worried about their neck. Snyder says patients are anxious about the facelift portion because they don’t want to turn out like the bad examples they see in magazines. He says, “The neck and the face are connected, they share many of the same structures, and if you’re going to take care of one, then you must also address the other.”

Most importantly, Snyder says, all facelifts are not the same, and a well done facelift will achieve the patient’s goal of a natural, well-rested look with a youthful appearance.