How to Fix a Drooping Jawline or Jowls How to Fix a Drooping Jawline or Jowls

Many people are bothered by their drooping jowls, or the sagging skin around the jawline and chin.

If you have a drooping jawline or jowls that needs correction, there is a  procedure that uses a patient’s own fat to fill in deflated areas.

They’ll say, “I don’t mind being forty or fifty years old, but I don’t want to be forty or fifty with jowls.” Dr. Patrick Sullivan, a board certified plastic surgeon in Providence, Rhode Island says sometimes this can be a condition that is inherited from your mother or father and there’s very little that can be done about a drooping jawline other than plastic surgery and sometimes weight loss.

Dr. Sullivan is a specialist in facial plastic surgery procedures and says people need to be very careful who they choose as their doctor for plastic surgery. Recently he consulted with a woman in her forties who was left with significant scars along both sides of her face along the jawline. Sullivan says the placement of those scars were not necessary for the result that she was looking for.

Dr. Sullivan uses a lifting procedure that is an extended inner lift with multiple layers, instead of just stretching the skin. He says he also looks at the chin region because often times people will have areas of deflation at the side, in front of the jowl. “These areas start getting more and more deflated causing the chin to look bigger,” says Sullivan, “and filling in this area with fat gives the jawline a smoother appearance.” 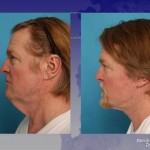 the jawline. This procedure is particularly common in men who want their deflated jawline to look more masculine. For this procedure, Sullivan says, “rather than using a synthetic material that might get infected, if you use your own fat you’re using your own cells, which helps to keep the fat alive.” According to Sullivan, younger patients are the best candidates for this procedure. “We’ve done this in young people who want more of a chin. We put in fat along the chin area and maybe a little liposuction in the neck region to give a more artistic appearance to the lower face so it matches the nice features of their upper face,” says Sullivan. He says, “it’s all about artistic balance.”

Sullivan says the jawline is an area where he can help people of all ages. 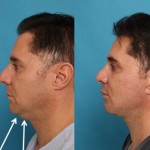 “Sometimes it can be a very minimal procedure or it can be a more extensive procedure where we need to remove excess skin.” He says, “we are re-positioning tissue to solve the gravity problem.” Sullivan uses permanent stitches to lift the tissue and reshape the lower face. Using this procedure he brings out the cheekbones which he says “is really their own tissue rather than cheek implants.” Sullivan says “it gives a very nice jaw line with a balanced face that is no longer square but more oval shape, which tends to be much more enhancing in giving them a more natural and youthful look.”

Dr. Sullivan advises patients to bring in photos from their earlier years. “When patients bring in pictures of them in their 20’s, it is so helpful for me to see what they looked like.” He uses the photos as a gauge to help restore what time has slowly changed.