Dramatic rhinoplasty results in Los Angeles, California leave patients with a more self-confident image. The nose is the most prominent feature on the face. It’s also the object of discontent for many people. Fortunately, achieving a symmetrical, straight and natural looking nose can be accomplished through plastic surgery or rhinoplasty. Dr. Geoffrey Keyes, a board certified plastic surgeon and President of the Los Angeles Society of Plastic Surgeons clarifies what to expect if you’re considering rhinoplasty.

Nose Surgery Provides the Most Impact for Change

Rhinoplasty is a surgical procedure to enhance the look of the nose says Dr. Keyes.  “It is also one of the most important operations for improving the appearance of the face and can have the most impact for change when blending the features of the face,” says Keyes. According to Dr. Keyes, whether you want to shorten, lengthen, narrow or turn up the nose, the change that can be affected by rhinoplasty can be very dramatic. Dr. Keyes says there are two techniques of approach for rhinoplasty surgery. 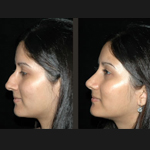 Open – An incision is made in the collumela, the vertical strip of tissue that separates the nostrils. The tissues are raised up and the operation is performed on the cartilage and bone in order to re-set and improve the appearance of the nose. Closed – The surgery is performed from within the nostrils, therefore there’s no incision or scar.  Keyes says it depends on the surgeon’s capabilities and experience as to which technique is used. Dr. Keyes says a comprehensive evaluation by the surgeon is required to make sure your health is in good shape and you’re able to undergo the procedure. “Most people prefer to be totally asleep during the operation and that requires intravenous sedation so they must be in good physical condition,” says Keyes.

What to Expect the Day of Surgery

What to Expect After Surgery

Rhinoplasty is an excellent way of improving your appearance if there’s something about your nose that bothers you. You should always seek a specialist to determine your options and to see if you’re a good candidate for rhinoplasty.