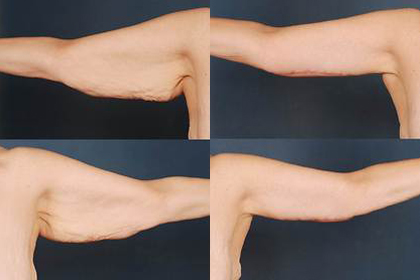 The brachioplasty procedure, or arm lift, has come a long way from where it began, leading to much better results. Dr. M. Bradley Calobrace of Louisville, Kentucky discusses his own improved technique that has allowed better placement and appearance of the dreaded arm lift scar.

Will an arm lift fix the stretched skin on my upper arms? time. While the term usually discusses tightening the skin on the face, plastic surgeons have been performing arm lifts for a number of years. “Women don’t like the look of their arms,” says Dr. Calobrace. “Unlike men, the woman body undergoes a variety of drastic changes that cause areas of the body to fill out and slim back down, causing stretching of the skin.” The main culprit here is pregnancy, which causes the abdominal region to stretch considerably, while also sometimes stretching out the arms. “There is a difference between a large arm and an arm with stretched skin,” says Calobrace. “A patient who dislikes the look of their arm because it is too big is a great candidate for liposuction; the procedure works fantastically well. However, for many women this isn’t the problem. Stretching, weight gain/loss and pregnancy have taken their toll on the arm, and while it may be small and contain little fat, the skin still looks poor because of all of the various stretching. This patient is the one a brachioplasty could really help.”

I’ve heard there are bad scars from brachioplasty. Are there any new

techniques to avoid this?

Similar to a tummy tuck, tightening areas of the skin involves pulling the skin tight and stitching it together, a procedure that produces a large scar. “When I first started performing brachioplastys 15 years ago, the procedure resulted in a large scar from the inner elbow up the arm,” admits Calobrace. “I wondered if I couldn’t find a less obvious place for the scar, so I tried moving it down and around behind the arm where the patient couldn’t see it. This helped tremendously in the self-confidence of the patient, and, surprisingly, also produced a great scar! I considered why this might be, and discovered that because I moved the scar to an area where the skin is thicker, it had a much easier time healing.”

Is it time to look into getting an arm lift?

Before, an arm lift procedure had to be weighed against the final result. Should I try to make my arms look better if there’s going to be a visible scar? Dr. Calobrace and other cosmetic surgeons have independently come to the discovery that moving the scar not only makes it harder to see, but also improves the look of the physical scar. Dr. Calobrace agrees: “I can say with confidence that our improved brachioplasty produces a great result that my patients feel fantastic about.”