Treating the Unsightly “Buffalo Hump” of Fat Behind the Neck

Treating the Unsightly “Buffalo Hump” of Fat Behind the Neck

We spend billions of dollars every year trying to keep those unwanted, extra pounds off our bodies. You know all the hot spots – our waists, abdomen, rear ends and even our necks. For some, the back of the neck is top priority as, over time, they’ve developed what some refer to as a “buffalo hump” of fat.

A hump behind the neck, sitting between the shoulders, can develop when fat gathers together. The condition is not medically serious, but can cause an unsightly appearance to the upper back and neck. The accumulation of fat is bizarre insofar as it seems unnatural; it seems to make sense when people gain weight in their abdomens or elsewhere, but the top of the neck?

The appearance of the bulge is likened to the hump of muscle seen on the American buffalo.

That’s not to say that tumors, cysts, and other abnormal growths can also form on your shoulders, creating a hump. And yet another possibility – that hump can be the result of a curvature in the spine, as often seen in aged, heavier women and men. Before patients consider a possible solution, it’s important to know exactly what the problem is underneath.

Is the Buffalo Hump Common?

Some of the potential causes are more likely than others, but factors, individually and collectively, can be due to:

Dr. Christine Hamori, MD, a board certified plastic surgeon in Duxbury, MA, says she encounters patients with buffalo hump several times each year in her practice. “A buffalo hump is a very focal accumulation of fat, kind of behind the neck,” she shares. “It’s usually pretty straightforward dealing with it. Aging can cause your buffalo hump to get worse and usually there’s a little genetics that plays into it.” 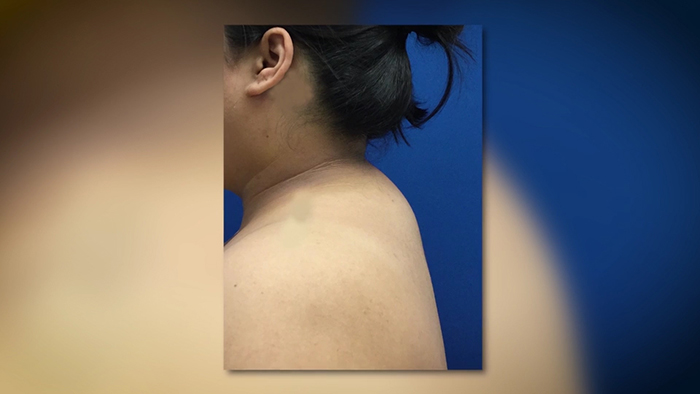 Dr. Robert Whitfield, MD, also a board certified plastic surgeon who practices in Austin, says the majority of buffalo hump cases he sees are the result of what the patient has been taking for another condition. “Typically, I see these in patients who have been on corticosteroids for long periods of time,” he explains. “Certain medications lend themselves to this.”

Correcting the Buffalo Hump with Surgery?

Buffalo humps can be addressed surgically, whether with liposuction or other techniques to remove tissue. The effectiveness of the surgery seems to be a mixed bag of success, depending on the surgeon and the uniqueness of the hump. Dr. Hamori says the surgery is simple, in general, and it works. “Place the patient on his/her tummy, numb it up with some tumescent fluid and aspirate out the fat,” Dr. Hamori says. “The recovery is usually quite short.”

Conversely, Dr. Whitfield hasn’t quite had the same success. “They’re sometimes difficult to resolve,” Dr. Whitfield adds. “Using liposuction in combination with excision can help. Most of the time, addressing the medical condition, stop taking the (corticosteroid) drug will resolve some of it. And then, depending on the size, density and location of it, try to reduce the volume with some form of liposuction. It’s difficult, though.” “I’ve seen some very large ones and those are the most difficult to treat,” the Austin-based plastic surgeon said. “Coming in early when you first notice it or your medical provider sees it, document it. That should stimulate conversation about what I can do about this and let’s try to get some kind of plan for it.”

As far as a hump returning, Dr. Hamori says that there is no guarantee, but the odds are in a patient’s favor. “It can come back but it doesn’t usually because you’re removing those cells permanently,” Dr. Hamori says.

While most plastic surgeons agree that liposuction is the most successful and effective way to eliminate the unsightly buffalo hump, they also say there are some non-surgical options, including reducing or eliminating corticosteroid medications and the improvement of posture, specifically focusing on eliminating the so-called ‘chicken head’ where the head juts forward out over the chest instead of drawing tall toward the ceiling. Regardless of the approach patients decide to take, all of the plastic surgeons interviewed for this story did agree it’s best to see your doctor or healthcare professional and establish a game plan sooner rather than later.