People often find that they just can’t hide the appearance of their aging neck.  We keep our faces looking younger and rejuvenated with non-surgical procedures such as Botox-type injections, dermal fillers and lasers. But when it comes to our necks, it’s a little more difficult to camouflage our sagging jowls, vertical banding, and double chins.

PSC Talks to an Expert in Facial Rejuvenation

Dr. Patrick Sullivan, a board certified plastic surgeon and expert in the field of facial rejuvenation says lasers, peels and fillers don’t work the same way on the neck as they do on the face. The three most common problems he sees in his Providence, Rhode Island practice is patients who would like to improve the appearance of their double chin, their turkey neck, or just their overall laxity of the neck and jaw area. The Plastic Surgery Channel recently had the opportunity to interview Dr. Sullivan on the best ways to rejuvenate our aging necks.

PSC – “What is the best surgical procedure for someone with a turkey neck?”

Dr. Sullivan – “You have to deal with the bands that come down. We start with a small incision under the chin and create a whole new support sling for that area. Sometimes if the patient has extra skin, we take some of the skin away in hidden incisions around the ears. The incisions can be hidden very well.”

PSC – “What is the best surgical procedure for people with a double chin?” 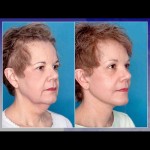 Dr. Sullivan – “Those fatty collections bother a lot of people and you’ll see that they run in families. Somebody won’t be fat at all but they’ll have this fatty collection under the neck. What we do is we go in through a small incision and take away the fat depending on what layer the fat is in. It can be just underneath the skin or the fat may be deeper under layers of muscle.  We remove the fat and then contour the area to try and give a beautiful, natural appearing neck and chin. After we have the neck contoured, we re-drape the skin down in a way so it doesn’t look tight or stretched. We want the neck to look very natural, so no one even notices their neck. Other people will just think, ‘Oh, you look great.’”

PSC – “Is Liposuction by itself an option for getting rid of a double chin?”

Dr. Sullivan – “You would think that would be the perfect area for liposuction, but it isn’t. Very often liposuction doesn’t work well in that area because it takes away that precious fat that gives the neck a soft, natural look. The neck can also be over-liposuctioned.  I’ve had people come to me where they have been liposuctioned in the neck and the skin is attached right down to the muscle and it’s a harsh unattractive look. It’s really difficult to correct and get back the softness once the neck has been liposuctioned. The idea is to approach it the first time in a way that you don’t liposuction but rather just sculpt and contour down the neck in a sophisticated way that shapes the neck area rather than just suctioning through a blind approach.

PSC – “You mentioned you ‘sculpt’ or ‘contour’ the neck, what does that mean?”

Dr. Sullivan – “By sculpting, you usually do an open approach procedure where you can see the fat, see where it’s excessive, find out if it’s above the muscle, below the muscle, and then move the fat away getting rid of the extra tissue.  We do this in a controlled way rather than just suctioning out the fat in a blind approach.  Suctioning can sometimes be helpful, but often times we see it to be more of a problem than a benefit.”

PSC – “What is the best way to find a surgeon that’s qualified to help me with my aging neck?”

Dr. Sullivan – “I think you should ask if the person is a board certified plastic surgeon; that will at least narrow it down to someone who has been highly trained. Look at a lot of before and after pictures to see what their approach is, what their artistic visions are and what their skill level is. The third thing you want to make sure is that you can connect with them.  Make sure they have listened to you and really understand what you’re looking for because you don’t want to have a stretched unnatural look and you want to make sure you get what you want.”

Can Fat Grafting Produce the Perfect Vagina?
Breasts Get a Boost with Internal Bra, Seattle, Washington