Take a look on-line and you’ll find hundreds of advertisements and articles concerning stem cell therapies. Many of the ads feature dramatic face lifts and claim to cure everything from Alzheimer’s to heart disease. “There’s a tremendous amount of buzz that surrounds stem cells and stem cell therapy” says Los Angeles plastic surgeon and Chairman of the Medical Advisory Board for The Plastic Surgery Channel, Dr. Peter Fodor. 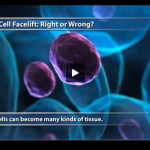 Dr. Fodor says the development of stem cell therapies is extremely exciting, not just for plastic surgery but for many medical specialties.  He states, “It’s important for the consumer to know the difference between what is science and what is marketing hype.” He says while there are isolated well documented cases of miraculous recoveries from neurological disorders to orthopedic issues, it’s difficult for the consumer to decide what actually works.  He says, “As of today, stem cell therapy is not FDA approved in this country.”

Banking Stem Cells for Future Use

Although the Food and Drug Administration (FDA) has not approved stem cell therapy, Fodor says he is looking forward to the research as it evolves. “In my practice we have been taking stem cells that we isolate from aspirated fat, which comes from liposuction, and we have been banking them very safely for future use,” says Fodor.

Dr. Fodor says stem cell science will eventually catch up and by banking stem cells now, they can be used later on if needed. Fodor adds, “The younger you are when the stem cell is collected, the more useful that stem cell will be to you later on.” He says the stem cell will stay the same age at the time of collection and will not continue to age as our bodies continue the aging process.

Continue to check in with theplasticsurgerychannel.com as Dr. Fodor discusses in a five part series, the future of stem cells in plastic surgery procedures. FAQ – Can My Breasts Be Made Exactly the Same? FAQ – What’s the Difference Between a Cosmetic Surgeon and Plastic Surgeon? FAQ – Can Surgical Procedures Be Performed Under Local Anesthesia? FAQ – How Long Does a Facelift Last? FAQ – How to Prepare for a Mommy Makeover FAQ – When Can I Exercise After a Procedure?